7 Types of Fishing Lures You Can Catch More Fish With

If you’ve been shopping for lures lately, you know that there are so many sizes, shapes, and types that it’s hard to even keep track, with each best used in different conditions and for species of fish. But lucky for you, we’ve created this beginners guide to the seven types of lures.

But first, let’s take a look at the pros and cons of fishing with lures.

First, the benefits of using lures:

There aren’t a whole lot of cons to using lures, but they could include:

People usually classify lures in one of seven categories:

We’ll give you a quick rundown on each so you’ll be able to easily identify them and know which one to use for what fish and under which conditions (referred to as  “Presentation” by fishermen). 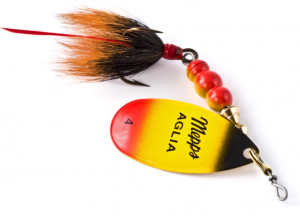 If you’ve just started fishing (and are probably already hooked on the pastime!), you might want to try spinners. They’re very simple to use, as they’re basically just a metal tube with a “spinner” blade on the end. As you drag the spinner across the body of water you’re fishing, the blade automatically spins. The vibrations and sounds of that spinning movement are easily picked up by fish in the area by their lateral line, and they then naturally swim closer to investigate – and bite. Since they operate so much via vibration and sound, they’re a great choice for stained water where visibility is low.

Jigs are like the Swiss Army Knives of lures, as they can hook about any species of fish that happens to be swimming by. They also come in a huge variety of shapes, sizes, and color patterns replicating live bait, including with a skirt of hair, feathers, or even plastic grub. Fishermen love that they’re not too pricey, either, making them a tackle box favorite.

Just looking at a spoon lure, you’ll know exactly where it gets its name, as its a piece of curved metal reminiscent of the dining implement. The daredevil spoon is my favorite one of all time. In fact, fisherman used to just break off the handle of a regular kitchen spoon and fish with it! These days, they’ve manufactured in a host of sizes, shapes, and colors, with a different model for just about every fish. Of course, as spoons travel through the water, their unique shape gives them a wobbling action that looks like a crippled baitfish – easy picking for a hungry gamefish!

Instead of one kind of lure, soft plastic baits describe a bunch of different lures. They’re really popular with bass fishing, and the old reliable is a simple soft plastic worm. As their name implies, they’re manufactured with a pre-designed mold that’s filled with liquid plastic. From there, the different varieties may include colored dyes, metallic flakes, and even chemicals that trigger scent. You’ll find soft plastic baits designed to replicate a whole host of forage for fish, like crawfish, worms, big insects, worms, frogs, and even lizards. However, some soft plastic baits don’t look like anything you’ll see in nature – called “Critters” – although they still will catch plenty of fish!

When you have lures that are made from emptied wood or plastic, they’re called “plugs.” These lures are made to look like all sorts of baitfish, frogs, or other creatures – except that their hiding two or three sharp treble hooks. Plugs also come as surface plugs, diving/floating plugs, poppers, jerkbaits, and even crankbaits. Unlike the soft plastics, they’re rigid lures, so they can be used at deeper depths (those usually have a plastic lip that helps their descent) or floating in shallows, too. They also can be designed to display different movement like shaking or wobbling, and some even gurgle through the water.

Ok, I know what you’re going to say: spinners and buzzbaits are some seriously weird looking lures, with their wired head and detached body. In fact, spinner and buzzbait bodies are usually also covered with a rubber skirt and metallic blades. But when you “Chuck-n-Wind,” or cast them out and reel in at a steady and relaxed speed, so the lure stays under the surface a few feet, the result is usually a big hit! 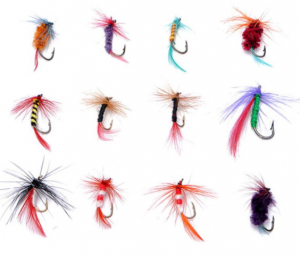 Fly fishing is a whole different kind of animal (excuse the pun), and so are flies, fly fishing rods, etc. Of course, flies set up on the water and float, so little clear bubbles are usually included with their design. They’re also the lightest and most delicate of lures, made of feathers, fur, foams, and rubber, but that doesn’t mean they can’t bring in some trophy gamefish. You’ll find amazing flies that replicate insects, leeches, hoppers, frogs, baitfish, and even mice! To give you thousands of additional choices while you’re shopping for flies they also come in just about every stage of the life cycle for each of those.

Now that you have a basic idea of the seven types of lures and when to use each, spend some time looking around, doing a little research, and chatting with other fishermen. If you still can’t decide which lure to use, pay attention to which anglers are coming home with a huge catch and just ask them what they use.

Best Crankbait Colors to use for fishing

Have you ever headed into a tackle shop or even started browsing online because you were looking for one specific bait? If you’re like me, you probably ended up buying about a dozen exciting new lures three hours later! It’s true – ice anglers have more options than ever, from hard and soft bait, shapes, paint designs, and, of course, every color of the rainbow (and then some).

The assortment of lures and bait available have exploded over the last few years with modern molding techniques and technology mixed with a revival in the best past time on ice. If you have unlimited time to shop for them and a wallet that’s so fat it tips your boat over, then you’re in bait shoppers paradise. But for the rest of us, we have to make some hard choices when it comes to picking out the right lure, particularly with crankbait colors.

To give you a hand, I thought I’d write down some thoughts on which colors are best for the different conditions and uses for both clear water and stained or dirty water crankbait. 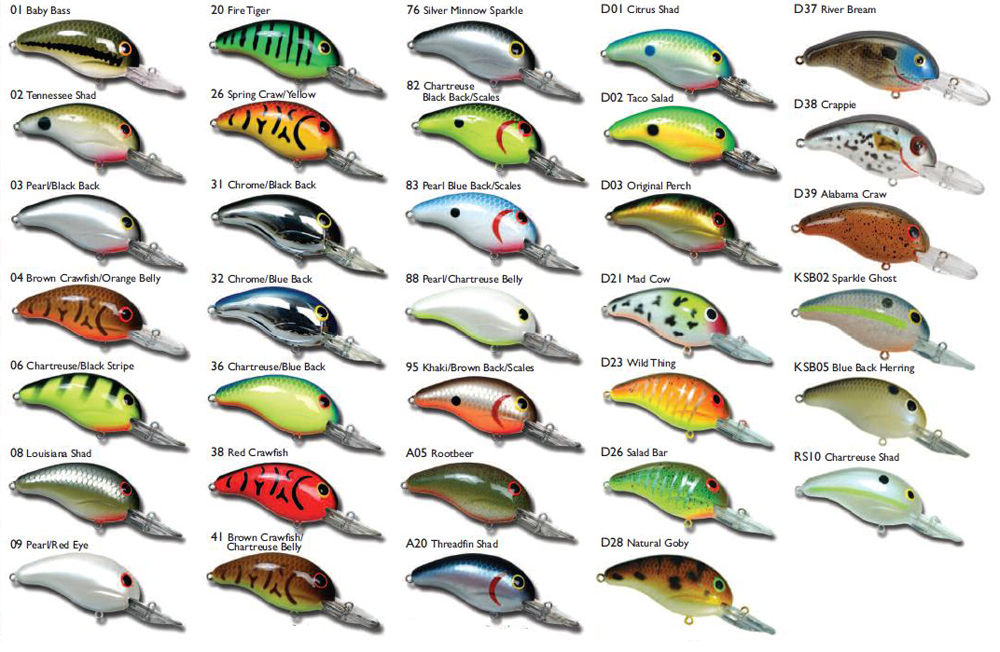 These are perfect for when the water is clear, with the shimmering the ghost shad gives off catching the eye of a bass without scaring them off.

If the clear water gets just a touch murkier, it’s time to get sexy – Sexy Shad, that is. In fact, this lure is a favorite at tournaments among prize winners, and even I catch myself staring at it for a while!

When we’re angling for bass that love snacking on bluegill, it’s time to get ugly, and there are plenty of lures that emulate natural bluegill. You’ll have luck with these fishing on northern lakes where bluegills forage all year.

Every time I look at this crankbait, I’m pretty impressed by the molding and perfect natural coloration of these crawfish. And when it’s springtime on the lake and the water is clear, crawfish are the way to go.

Touring pros and seasoned anglers love this bait for stained water, and they’ve had the bass to prove it. In dirty water, the chartreuse pops just enough and the fish come calling.

On some lakes, Citrus Shad are incredibly effective, and I don’t think there’s a better bait under those conditions. Its belly is white like a shad, but its back also blends from blue to chartreuse – a great influence of the sexy shad.

If you’ve been fishing for a while then you probably know about Homer, a big prize winning color in the 80s and 90s that’s undergone a name change recently for some. But it’s still just as good for crankers, with a rich blue on its back,a easy to spot belly, and sides with chartreuse.

When the water gets dirtier and dirtier, especially up north, the Fire Tiger is one of the best lures for getting fish’s attention. It looks similar to Homer but also adds some mottled black striping on the sides, giving just enough contrast to get the big ones chasing!